Immediately after the attack on Baba Piara Singh, local Misl Fresno members got into action. That Wednesday during a Press Conference and Q&A session with the Chief of Police and State prosecutor’s, Misl Fresno volunteers booked the Darbar Sahib at Nanak Sar Gurdwara, a gurdwara where Baba Piara Singh did his seva, for a Sukhmani Sahib dha paath.

In moments of stress, fear and anger its important for us to pause, even if for a moment, to center ourselves before carrying on with whatever lies ahead. Also for those older members of our community who don’t have the same access to resources, it’s important for them to see a sense of community and support. 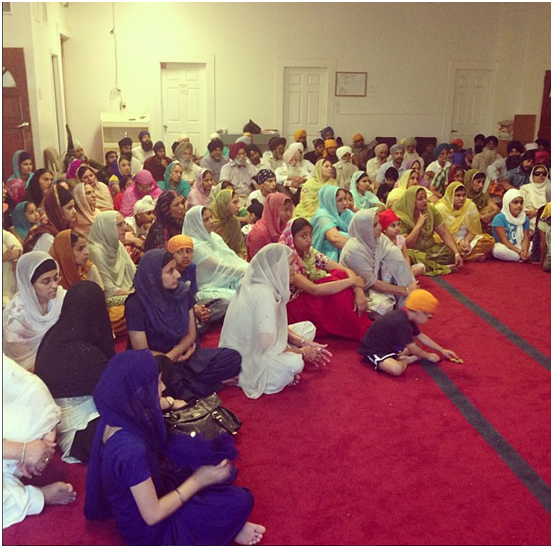 While sitting down and reflecting on my own thoughts and feelings and dissecting every approach on how to help the community, while at the same time feeling angry, stressed, my conscience would arise from the flurry of thoughts and emotions and silence my mind. For those few moments I would smile during Sukhmani Sahib and focus on the stillness within me and Bani and knew that we would survive. Having talked to the family members of Baba Piara Singh I knew he would be all right. As I looked up, I scanned the darbar sahib and seen dozens of Sikhs of all backgrounds sitting doing Sukhmani Sahib, together.

As soon as we had finished and did ardaas for the Chardi Kala of our community, Baba Piara Singh and his family, we all moved from the Darbaar Sahib and into another room for our Town Hall meeting. The idea being - no one would be excluded from the conversation; everyone would have a voice on how to address these types of attacks and tackling the ignorance that exists within the community.

While sitting in the back, watching Misl Fresno sevadaar(nis) who were taking on a heavy responsibility to ensure that the ideas and voices of the community were taken seriously and further, implemented I felt this is what the process of decision making should be and what Guru Gobind Singh intended it to be. Though at moments conversations between different groups became a little tense, it was amazing that so many Sikhs from different backgrounds were there; coming together for a common cause. The outpouring of support for the family was just as astonishing. With the attacker in custody, it was time for the community to ask, what next.

Though there have been many initiatives to get Sikhi into the school systems locally, to dispel any fears that people might have, those same fears which at times manifest themselves as violent outbursts could be reduced if knowledge was only a doorstep away. So, here we are, preparing to go door-to-door to shed light on a community they so often encounter but know little to nothing about them.