Reflections on the Jakara Movement's Caravan for the El Paso 37 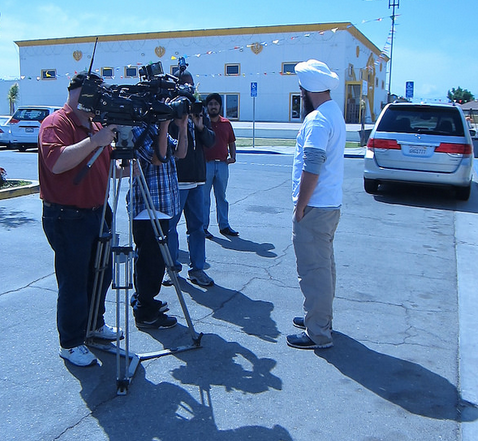 IF YOU WOULD LIKE TO STAY INFORMED - please fill out the petition and circulate!

Fresno, CA (April 28, 2014): Although widely known, it Is an issue that is often ignored in the Sikh-American community.  It is the issue of immigration.  The subject is large and has many parts.  This article explores one of those parts and one group of young immigrants.

It was a ColorLines (online magazine) article in December 2013 that first alerted Sikh-Americans to the plight of 32 Punjabi men that were being held in El Paso, Texas (USA).  These young men from Punjab had come through a long and difficult journey (from Punjab to Delhi to Istanbul to Guatemala to Mexico) and upon entering the United States, immediately surrendered themselves to the Immigration and Customs Enforcement (ICE) agency.  They immediately sought political asylum, due to the brutal tactics of the Indian Government.  It is important to emphasize that they were not caught by ICE officials. Rather they did not try to live illegally, but rather upon entering turned themselves into the proper authorities. 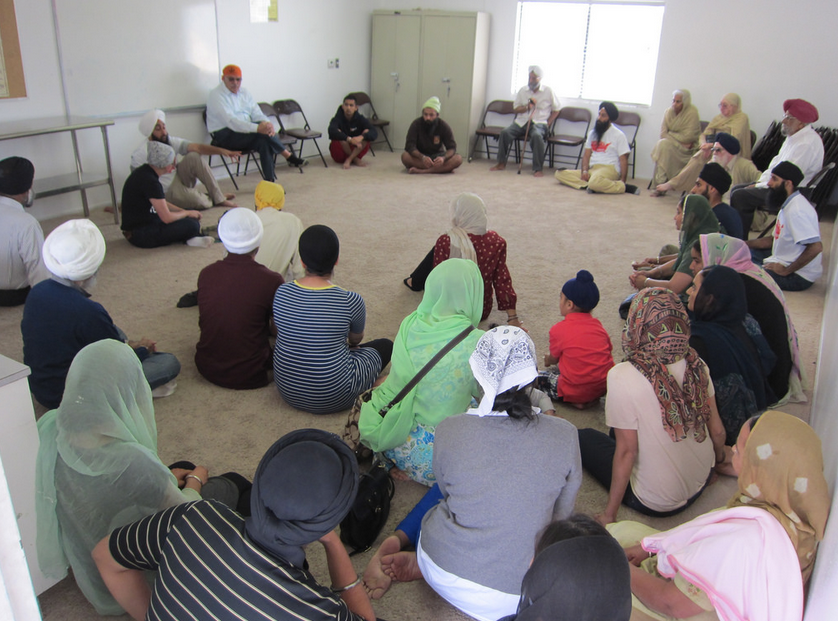 Despite the US Supreme Court’s decision that urge Immigration and Customs Enforcement (ICE) to either reject or parole asylum-seekers within 6 months, some of these Punjabi men continued to be detained even after 12-15 months without any indication of being.  All had passed their interviews and had established ‘credible fear’ due to the brutal policies of the Indian Government.  They have all been detained for far longer than the limit.  Should America that says it welcomes its arms to those that seek freedom, now turn around and imprison these same people? The story only gets worse. 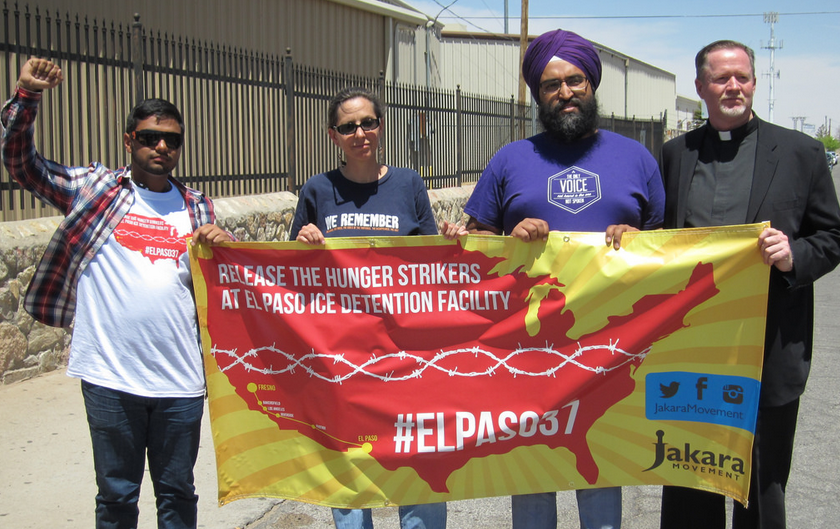 Around Vaisakhi this year, the Punjabi men decided that this unjust indefinite detention, despite the fact that they had committed no crime, needed to be highlighted.  Parole that should be given continues to be denied.  The men began a hunger strike and became quickly labeled in social media, Facebook, and Twitter as the “El Paso 37.”  This was due to the fact that there were believed to be 37 Punjabis in El Paso, although the actual number is closer to 45 and includes 2 women.  The Punjabis then came under tremendous pressure from the authorities at ICE to end the hunger strike.  When the Punjabi men finally ended their hunger strike due to the pressure and intimidation, as many as five, who were seen as the ring leaders were put in solitary confinement, leading to the hospitalization of three of them.  Even worse, an Indian Consulate official from Houston – NPS Saini – was allowed to enter, berate and even threaten the asylum seekers.  This is a huge lapse of judgment by ICE officials to allow a member of the offending government to visit the detainees. 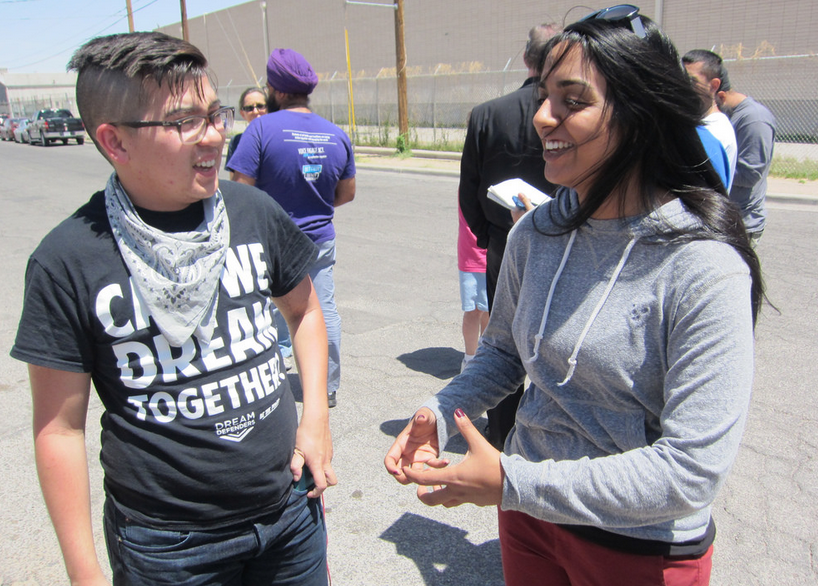 As news of their hunger strike began spreading across the internet, a group of young Sikh-American activists decided to take action. Members of the Jakara Movement, the largest Sikh youth movement in North America, decided that they could not sit quietly while their brothers and sisters were hungry and suffering in El Paso. As Iqbal Singh from Fresno, a staff member of the Jakara Movement stated, “Guru Gobind Singh commanded us to fight for justice.  We will not wait, when others are suffering.”

On Friday, April 25th, a van with 12 Sikh men and women traveled the 1,100 mile route from Fresno, CA to El Paso, TX.  The Jakara Movement sevadars left in the morning from Singh Sabha Fresno, after speaking to the media and being joined by supporters in the sangat.  They were joined by Cayden Mak, a partner and ally from the online advocacy group – 18 Million Rising. Next these college students went to Guru Angad Darbar in Bakersfield.  There supporters met them and gave them strength.  They also met with members of Mexican youth groups that wanted to show their support, including those from Faith in Action Kern County. They spoke to the media and then traveled to Pacoima, CA.  In Pacoima, they stopped at Khalsa Care Foundation Gurdwara and met with more than 50 members of the sangat.  They had a conversation and shared information about the detained Punjabis.  After leaving Pacoima they traveled to Artesia, CA.  There in Little India they worked with the South Asian Network and Asian Americans Advancing Justice.  They passed out flyers to the shoppers to teach them about the Punjabi detainees.  Finally they left Artesia and traveled to El Paso. 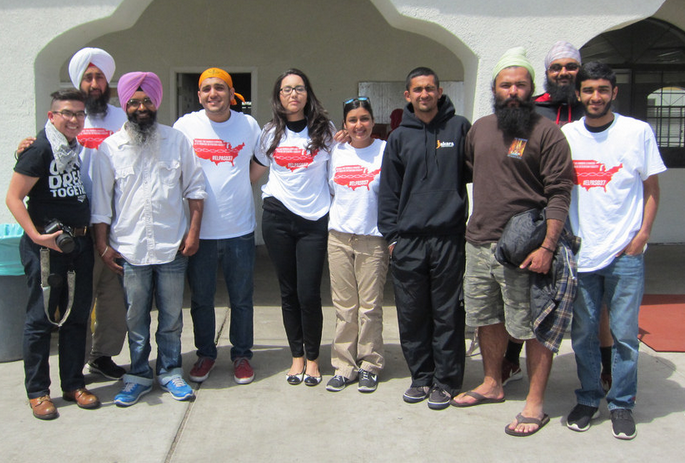 Twenty-four hours after leaving Fresno, they had arrived in El Paso on Saturday, April 26, 2014.  They spent some time refreshing at the Columban Mission Center and meeting Gurmukh, Father Bob, who offers love and comfort to all. One member of the group was able to enter the detention center and find out about their conditions.  The other eleven staged a rally outside the El Paso Detention Facility.  Jakara Movement staff Palvinder Kaur said, "We will travel any distance to stand with our Sikh brothers and sisters.  We heard their call and we
are here for them."

The one sevadar that visited the detainees sat with them for Sukhmani Sahib.  He then listened to their stories.  One detainee shared the difficult conditions they are facing.  Many of them were worried about their cases, because many lawyers take advantage of them and their family, charging them a lot of money, but not helping them get out. Despite their hardships, knowing that the Sikh youth care for them filled them with chardikala and hope.  The van with the 12 Singhs and Kaurs then left El Paso and returned to Fresno on Sunday morning, April 27, 2014.

The Jakara Movement sevadars are now in touch with the detainees and are working with others groups to help provide for their needs.  In addition to sending them cloth for turbans and books in Punjabi, they are working with lawyers who understand immigration law and can help these men get released. 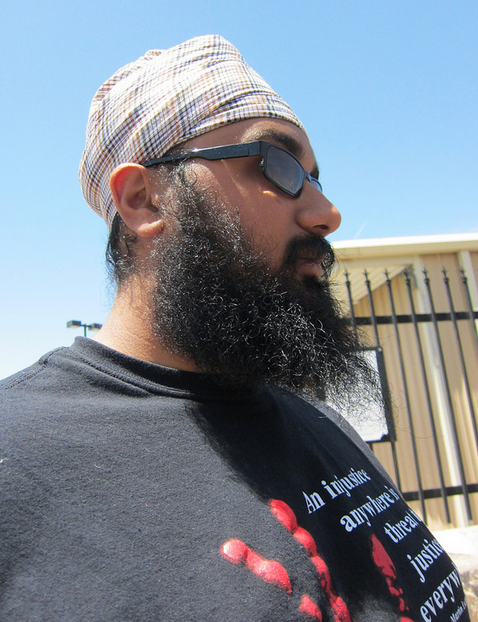 This is not a story of illegality.  This is a story of people.  This is a story of Punjabi men doing everything correctly, but a system that continues to fail. Many times in America, people think immigration is an issue about "Mexicans."  It is our issue.  Sikhs need to fight for a just immigration policy that is kind and sensible.  We must begin to join our Mexican brothers and sisters and many others in protests and demonstrations.  We must give a Sikh voice to the immigration debate.  People seeking asylum from tyrannical governments like India must always find freedom and opportunity in America.

More info and pictures from trip can be viewed at www.elpaso37.org

Please sign the petition and stand in solidarity with the El Paso detainees.

Visit the pages of our partners and allies: