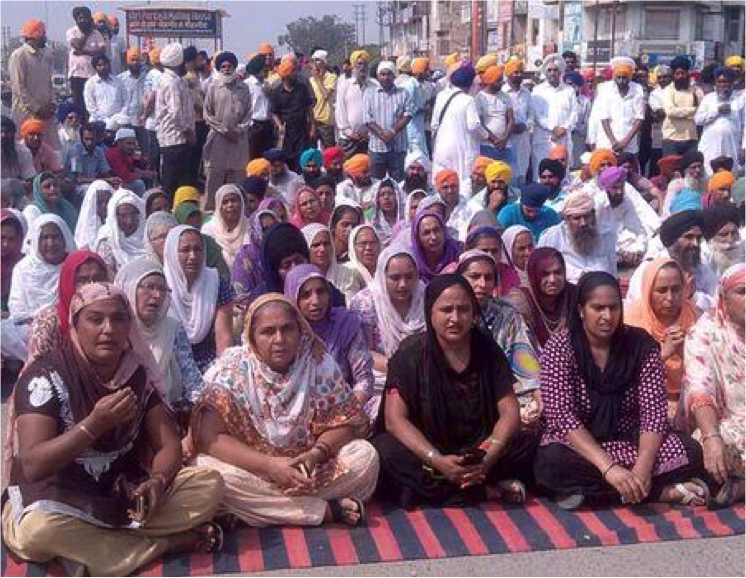 The Sikh Nation is mobilizing.

All around the world, its eyes are turning towards Punjab. A new generation of community organizers and activists are mobilizing to spread word of recent events in Punjab.  Corrupt governments are not new to the Sikhs.  Even Guru Nanak described the head of governments of his age as being mere "butchers" and their officials as "dogs" eager to prey upon the righteous.  Dark days lie ahead, but so long as the guiding light of the Guru and the desire to hold the Qaum's dignity are at the forefront, then the Khalsa will indeed rule.

There are several characters and names one must know in order to understand what is going on.  The key ones include:

Prakash Badal – the 90 year-old chief minister of Punjab and head of the Akali Dal political party. Despite his well-known corruption, Badal has maintained a grip on power since the 1970s. One of Badal’s effective tactics has been to periodically raise Sikh issues at his convenience and discard them as the political winds turn. For example, in 2012 Prakash Badal remained silent on the incarceration of Bhai Balwant Singh Rajoana until mass unrest forced him to call for the Indian Government to commute the death sentence to life in imprisonment. Badal has consolidated his position by seizing Sikh institutions and exercising a level of control that no other figure has matched since Maharaja Ranjit Singh’s reign. He has been blamed for steering the once-promising economy of Punjab into a stagnant and crisis-laden state. It is widely known that Badal has pocketed hundreds of millions of dollars in Punjab’s assets as well as used his political position to bolster his own economic enterprises, one of the worst forms of crony capitalism.  He was even arrested for violating anti-corruption acts and was acquitted only after nearly a dozen key witnesses mysteriously retracted incriminating statements.  His ill-earned riches and length of rule is even longer than other more well-known dictators such as Hosni Mubarak of Egypt, Ben Ali of Tunisia, and others.

Sukhbir Badal – the 53 year-old son of Prakash Badal. He holds the only ‘deputy’ chief ministership in the world – his father invented the position for Sukhbir in an effort to create a “democratic” dynasty. While Prakash is known for his guile and political trickery, Sukhbir relies on paid thugs to achieve his goals. He frequently has his opponents harassed, hurt, or killed by police cronies. He is also known for his corruption; many Punjabis refer to him as “Mr. Pachi Percent (25%)” because of his penchant for extortion. Businessmen and youth, understanding that Sukhbir is the next in line to rule Punjab, are fleeing abroad out of fear that Punjab has no future under him.

Gurmeet Ram-Rahim – the head of the popular Dera Sacha Sauda (DSS) cult, he is revered as a “god” by his followers. Despite allegations of sex crimes, murder, and claims that he coerced 400 male followers to undergo castration procedures, Ram-Rahim has established a strong base in Punjab and Haryana, which he has converted into massive political influence. In exchange for his endorsement – and consequently, his followers’ votes – Ram-Rahim benefits from government patronage and favors. For example, after Ram-Rahim achieved notoriety in 2007 by publishing an advertisement where he posed as Guru Gobind Singh, many Sikh organizations protested his actions. Ram-Rahim’s followers killed some of these protesters. Ram-Rahim, facing murder charges called on Prakash Badal for support. Badal transferred the case to a Haryana court, where the charges were dismissed without so much as a trial. Over the last 8 years, tension between the DSS and Sikhs has mounted. In late September 2015, the Jathedar of the Akal Takht accepted an “apology” by Ram-Rahim and pardoned him. Ram-Rahim never went before the Akal Takht to apologize. Most political observers believe that Sukhbir Badal ordered the Jathedar to issue the pardon in exchange for Ram-Rahim’s support in the upcoming 2017 Punjab elections. The 2017 Punjab Legislative Assembly elections is suppose to be a tight election and Badal is looking for all the support he can muster.

Jathedars – the word “jathedar” literally means “a leader of a group.”  In Sikh parlance, it refers to a leader in general, though special prominence is accorded to the jathedars of the Takhts (thrones). Of these, the Jathedar of the Akal Takht is the most esteemed and influential. Many Sikhs consider the Jathedar of the Akal Takht to be a leader of the community, although its historical importance is debatable. Today, it is well-known that the Jathedars are political appointees of the Badals. They attain their position not through knowledge of Gurbani and the Guru Granth Sahib, but through sycophancy and allegiance to the Badal family. Gurbachan Singh is the current appointee with the title ‘Jathedar of the Akal Takht.’ Since 2008 Badal has allowed him to hold this position.  Gurbachan Singh is notorious for his sexist statements in response to the rash of prominent rape cases in Punjab and his recent pardon of Ram-Rahim (and the subsequent withdrawal of that pardon). In keeping with recent tradition, Gurbachan Singh will be ejected from his position and replaced by another if he opposes the edicts of the Badal family.

Here is a very brief description of the developments and their most recent timeline.

On June 2, 2015, a bir of the Guru Granth Sahib was stolen from the village Gurdwara at Burj Jawahar Singh Wale. Sikhs registered cases against a follower of DSS who allegedly confessed to the crime. The police did nothing.

On Monday, October 12, 2015 in the village of Bargari (neighboring village of Burj Jawahar Singhwale) in Faridkot district, over 100 pages (angs) of the Guru Granth Sahib were found strewn all over the village. The villagers were outraged and news spread across Punjab through Whatsapp and social media. By the next day, October 13, over 30,000 protesters staged sit-ins throughout Punjab, especially in the Faridkot and Moga regions.

On Wednesday, October 13, police units fanned out throughout the state. Police forces from 9 districts invaded Kotkapura (district Faridkot). In some areas, the authorities fired tear gas and water cannons into the peaceful crowds. In others, they fired indiscriminately into the massed protesters. Between 80 and 100 protesters were beaten, shot, and trampled by charging police. Two men died from gunshot wounds in Kotkapura. 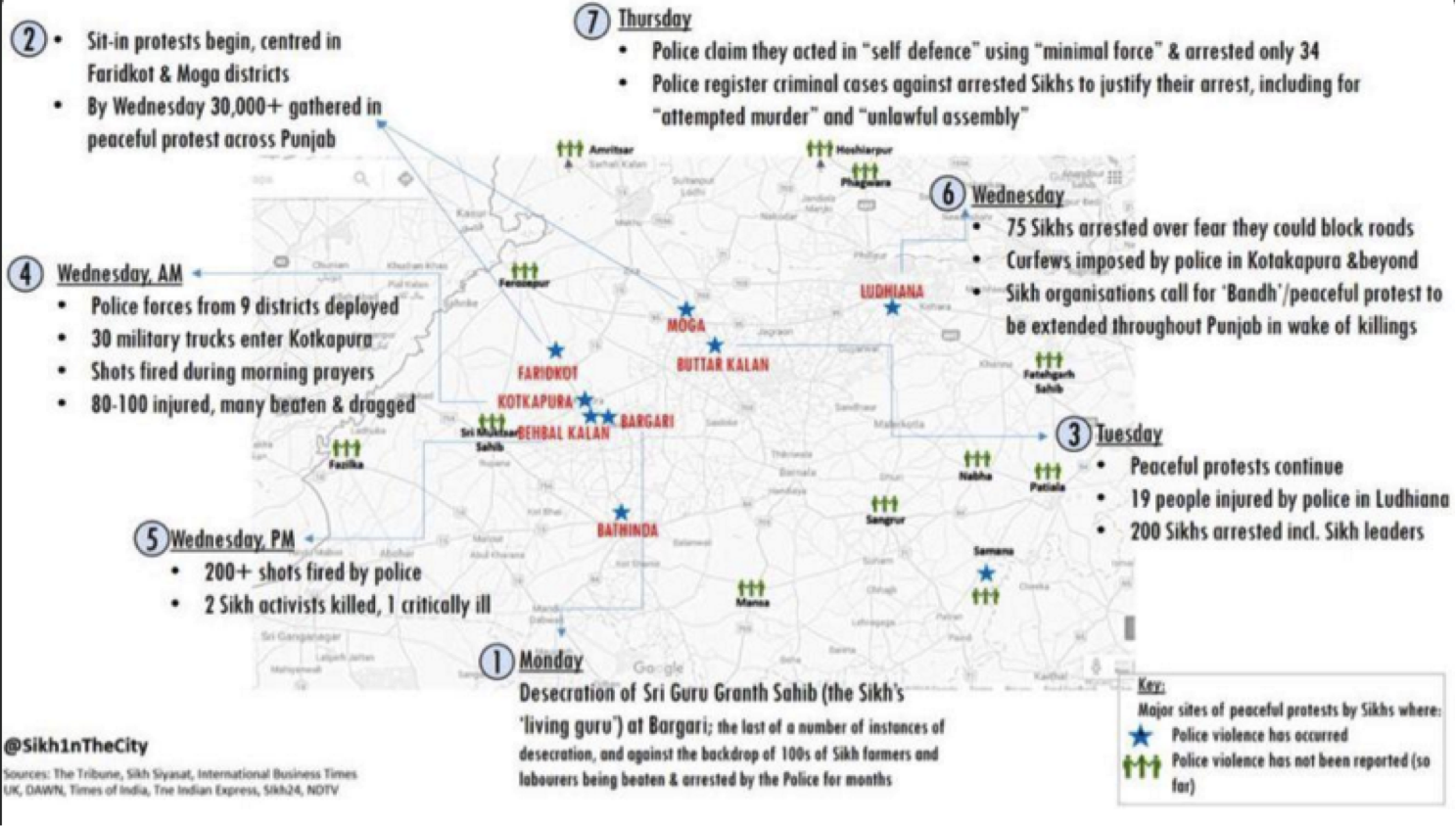 Why Are So Many Sikhs So Angry?

Many factors have contributed to the unrest in Punjab. 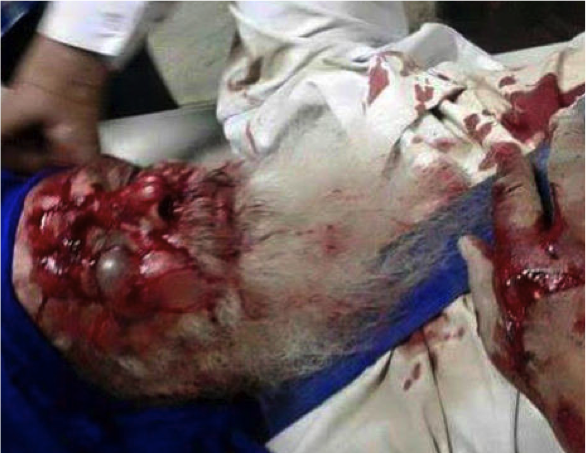 First, the public denigration of Guru Granth Sahib by known culprits upset many Sikhs. Disillusionment with the government increased when it failed to take action against the culprits, allegedly for political reasons. Disillusionment turned into anger when the police reacted to Sikhs’ peaceful protests with immediate violence. The hypocrisy of the treatment of the culprits versus that of the peaceful protesters lay out to all the priorities of Badal’s government.

Sikhs are galled by the fact that such violent police and military responses are now routine in Punjab. Since 1984, recurring state violence has left politically conscious Sikhs feeling hopeless and humiliated.  In this most recent round, there are at least 2 Sikhs dead and countless injured, yet all know that none will be prosecuted.

Perhaps most significantly, Sikhs have taken to the streets because it is now clear that they exercise no control over their own institutions. When you don’t control your institutions, you don’t control your future.  The SGPC (Shiromani Gurdwara Prabandhak Committee, the body that governs all Gurdwaras in Punjab, Haryana and Himachal Pradesh) and the Akal Takht have been wrested from the community’s hands by oligarchs such as the Badals. While these institutions have emotional significance for Sikhs, they are also potent political structures that Sikhs have organized around for decades and even centuries. Without them, the Sikh community lacks direction. Its leadership has been bought off by kleptocratic officials. Corruption abounds in Punjab. Feeling hopeless, much of the Sikh youth has but two paths available to it: migrate abroad or turn to drugs.

What Can We Do?

The future of Sikhi will largely be decided in Punjab. However, this does not mean that there is no role for diasporic Sikhs.

There are two models that diasporic Sikhs may follow: that of the American-Sikh (or British Sikh, or Canadian-Sikh, etc.) or that of the Sikh-American (or Sikh-British, or Sikh-Canadian, etc.).

Many organizations in the diaspora have adopted the former model, as have many second-generation Sikhs. American-Sikhs immerse themselves in the American national culture and seek limited accommodations for their “peculiar” appearance. Such liberal politics of inclusion and respectability increase Sikhs’ comfort in the West and may even provide them with access to photo-ops with some government officials, but does little to benefit Sikhs in situations such as the one currently unfolding in Punjab.

The second model is more difficult. Sikh-Americans assert a place in their communities, but understand that their relationship with fellow Sikhs – regardless of which passports those Sikhs hold – will define the Sikh community’s future. This cohesiveness will infuse the Sikh Qaum (nation) with direction and potency.

The following are a few of our suggestions in trying to proceed along the second model, based on some of our own experiences in youth development and community organizing.

The struggle for Sikh institutions will be the greatest struggle of our generation. This is the same struggle that has been written in blood since 1984.  Though this campaign will end in Punjab, let us start it overseas.  Start now and start small, but think big and plan big.  Either we will regain control of our community institutions and hence control our destiny and our own future, or we will continue to be the puppets of another.