How I Spent My New Year's Day 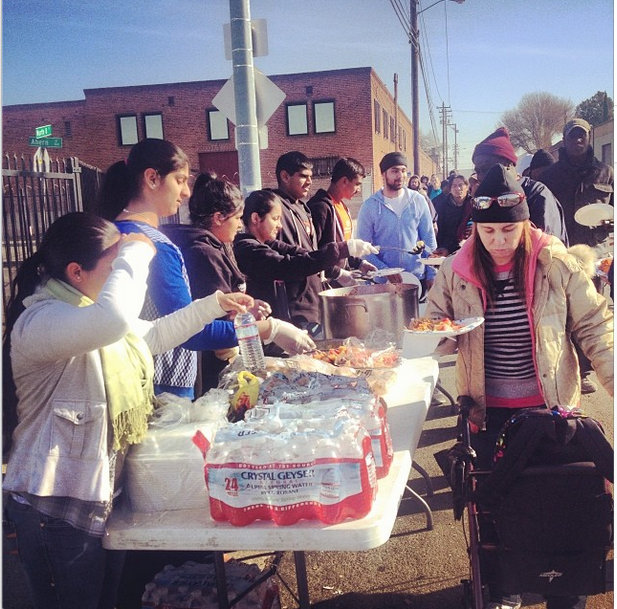 When I woke up early in the morning on New Year’s Day I was so happy I would get to see my fellow brothers and sisters from Jakara but I was even happier knowing that I would be reaching out to the less fortunate.  As a member from another charity group called SEVA, Jakara only gave me a more rich opportunities to feed the homeless.   As I started to help make a big batch of spaghetti I realized how much we were able to bond and come together to make a difference.  As we loaded our cars and headed to a spot behind Loaves and Fishes I saw how many people were left out on the streets to struggle on their own.

As we got out of our cars immediately I heard many people saying thank you so much for coming out today, or even God Bless your soul.   As the food continued to be served I decided to walk around and picked up trash.  As I walked down the street I met many wonderful men and women who I had the opportunity to talk to.  Many of these men were war veterans and were left to fend for themselves after being discharged.  The women I talked to were very humble and had told me they were looking for jobs in order to see their families again.

I realized how bad homelessness was and I now know that these people didn’t want to be homeless.  Almost every single person I talked was either looking for a job or was saving money to improve their life and their families life.  The biggest thing the government lacks to support mentally ill people is mental facilities.  There are countless numbers of men and women who need serious help from facilities and to the general public eye they are stereotyped as drug junkies or alcoholics.  It makes you think how smart of a move it was for President Reagan to shut down these facilities.  Essentially, if you stop for a moment and think you would realize that homelessness can happen to anybody if things simply go the wrong way. We must treat one another with respect.  Regardless of our origin or our economical situation we are all human beings and we are in it together.