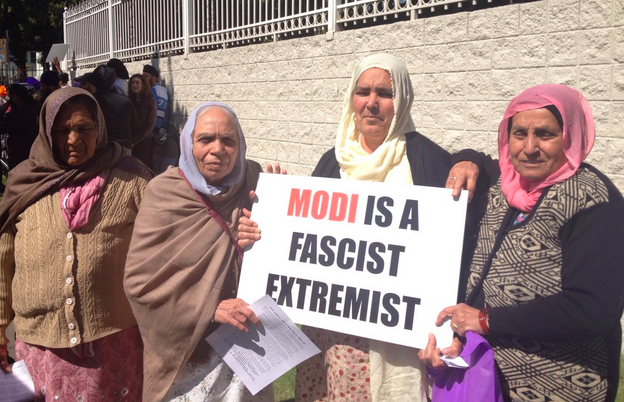 Thursday, April 16, 2015.  The center of Sikh-world turned towards Ross Street Gurdwara.  The masands and committee members of the Gurdwara showed they were morally bankrupt and willing to lock out the sangat to allow in a tyrant; Modi, himself, a man with little moral scruples showed that the corrupt system he represents will sell out farmers and the poor for the corrupt corporatists and their multinationalist friends, a key principle for all fascists; the Canadian government, long heralding its concerns for human rights, showed that these are largely hollow now and can be sold for promises of trade deals; however, a coalition of 20+ “Communities United against Narendra Modi” showed that they would not be silenced in the face of injustice.  Beneath all of these happenings, there were some stirrings that may have historic ramifications.  April 16, 2015 showed that the Sikhs of British Columbia have a path open to them for finding their political voice again and the day may mark a turning point for the Sikh youth of BC just realized the power of theirs.  They had a choice to make - #MewaOrBela - and those that stood, shouted, and were even arrested outside of Ross Street Gurdwara – indeed showed that they are the descendants of Mewa Singh.

After such a momentous occasion, even former enemies that had stood in opposition for decades, now found themselves shoulder to shoulder on the side of justice.  Khalistanis stood with communists, critical Muslims stood with First Nations, feminists stood with Christians, and critics of the Bill C-51 made their voices heard too.  This was a beautiful thing, especially the fact where Punjabi leftist groups could come and make common cause with Sikh nationalists, despite a turbulent history.  However, familiar voices like immediately after the event began criticizing this momentary unity.  This is absolutely the wrong approach and is rather a betrayal of the possibilities of the cause of April 16.  Past grievances and frustrations may not be healed in one day, but nor should they be highlighted as to end future opportunities for coalition-building.  As Moninder Singh, who we will return to, can attest the "anti-India" factions of Sikhs were hardly forthright and staunch in standing up to Modi either.  The time is to bring people together, not emphasize differences that usually drive us apart.

Now to return to the thesis of this post – April 16, 2015 was the day that the British Columbian Sikhs found their voice again and that the 2nd-generation Sikh-Canadian youth of BC's Lower Mainland realized that they have a very powerful and important one. 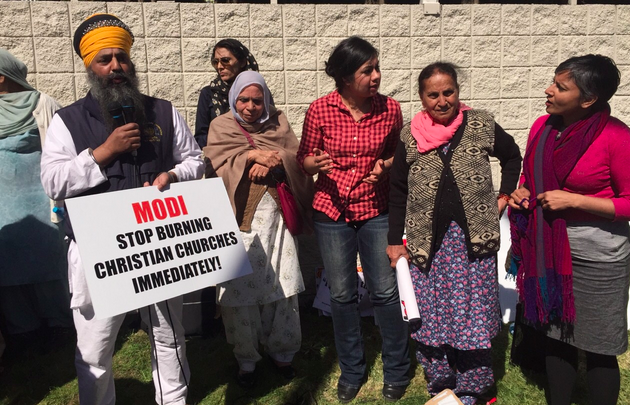 It isn’t that the British Columbian Sikhs were ever silent, it was the nature of the how that voice was used.  Sikhs are extremely political and in the last two decades, though of course with roots extending much further, Sikh-Canadians have entered Canadian politics in a BIG way.  Any Canadian election will now have an almost-over-representation of Sikh faces, usually opposing each other, on all sides of the political spectrum.  However, there are dangers here too.  The voice of “Sikhs” on political and social justice issues risk being cannibalized by the prism of partisan politics: be they Liberal, Conservative, or New Democrat.  Other politics that illustrate the existing voice have less to do with Canadian politics, but is the rather cantankerous “Sikh” issues – especially those related to doxy and practices that can become highly divisive, contentious, and sometimes even violent – whether it be on issues of langar, status of the Dasam Granth, or other issues.  All these generally serve only to alienate large sections of the Sikh youth, though to be fair they animate a very small sliver of youth as well.  What was different about this Thursday was that the BC Sikh community got to stand in coalition with so many groups on issues that are relevant to justice, not just for Sikhs, but for all of South Asia and with the issue of Bill C-51 being raised, for all Canadians as well.

The specter of the Air India bombing has long loomed large upon the British Columbia Sikh population.  Media scapegoating of an entire community and often highly racialized reportings of problems in the community have long caused feelings of victimhood and even self-hate amongst a generation of youth.  April 16, 2015 shows that the Sikhs of BC have a voice to add as Sikhs to the Canadian body collective.  Those that came out were doing something very different than the still important annual, though largely domesticated and almost ritualized June vigil around the Battle of Amritsar (1984).  This action had ramifications and possible costs.  It is probably the reason that so many Gurdwaras, even if they didn’t overtly take the position of Ross Street Gurdwara, backed out from their initial positions of taking a public position against the politics that Modi represents.  The politics of patronage and veniality that extend from Punjab to Canada are long and deep, and many of the opportunists, like Bela Singh in the past, decided to break from the initial calls for a unified principled position.  One can hope that the Sikhs of British Columbia find common grounds around the issues of niyaao and justice with other groups and can air a “Sikh” position on these issues.  April 16, 2015 shows that this can be done and by avoiding internal community divisive positions on doxy, the ability to bring different Panthic groups and even non-Panthic groups on a common platform, standing with the marginalized, can be a way forward.  The Sikh position on social justice and the message of Guru Nanak is one that is crucial for Canada, but it is for the BC Sikhs to find which voice do they wish to speak with – that which only divides or that like Banda Singh Bahadur and others that can bring all together for common cause against injustice.

The other key point is that the 2nd generation Sikh-Canadian youth are realizing the power of their voice.  This wasn’t the first time, a change has been in the making, but April 16 shows the possibilities.  The day started with Canadian-born Moninder Singh willing to spend time in jail rather than allow the Ross Street Gurdwara committee lock out the sangat and allow in a tyrant.  His courting arrest, an act of direct defiance and civil disobedience, set the tone that a new generation is here, unafraid (Nirbhao), and without hate (Nirvair).  Few others, even those that were standing next to him, had the courage of their convictions and most quickly ran away, while some brave Kaurs gave Jakaras to Moninder Singh’s actions.

The stage of the Unified Action was filled with youth voices, including the Azaadi Movement.  With greater planning and coordination the room for the second generation Sikh-Canadian youth of British Columbia, who have long faced levels of racism and police abuse that even their peers in Ontario never dealt with, the voice can become a thunder.  They are politically conscious and principled in a way that their parents could never be.  It is their time to shine.

In concluding this post from eyes south of the Canadian border – that is from the United States – one has to be worried about the state of American affairs.  While the Sikh-Canadian youth are realizing the power of their voice as activists, for the past half-decade the concern of Sikh-American youth has been to become advocates.  This is not an argument for either/or, but advocates that seek only to speak for the community and that are far more comfortable in a conference room with non-Sikhs than a Gurdwara stage or protest rally microphone in front of their own community is not the way forward.

Thus, when Sikh-Canadian youth, like the Azaadi Movement, are on the streets and calling for "No Modi and No Harper", and still others are courting arrest, Sikh-American organizations (none can be singled out since this is largely the case of ALL of them) don’t even take a position and merely ask questions on Facebook -

We need advocates, but we need activists more.  The Sikh organizations in the United States have largely shaped this outcome, but it is time for the Sikh-American youth to reflect on the long-term effects.  People will make arguments about ends for the reason for advocacy, but the means are important too.  Where would Guru Nanak wish for us to stand?  Are we the Sikh-Americans descendants of intellectuals like Kartar Singh Sarabha or merely Har Dyal?