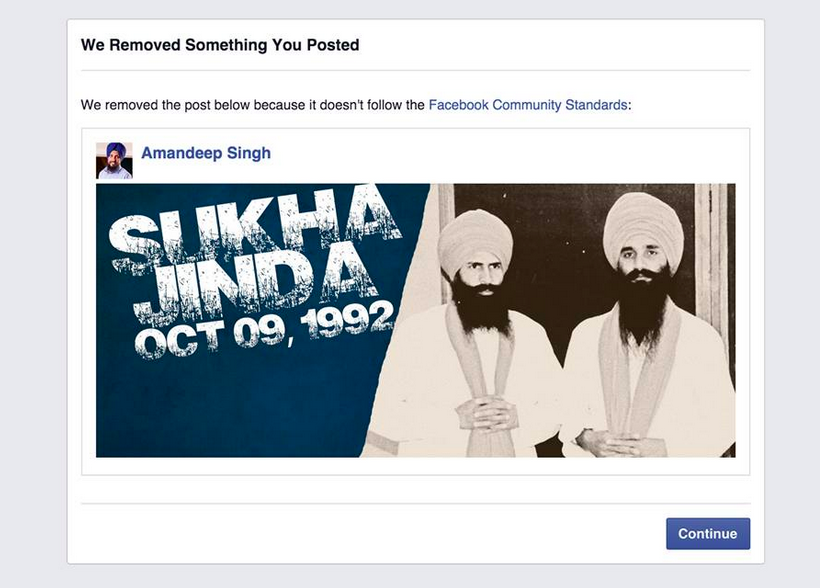 The following was written by a community organizer with the Jakara Movement and completely reflects the point of view of the organization.

Earlier today a friend posted about the above picture being removed from his profile due to “Community Standards.:

Now according to your Community Standards:

“We also remove content that expresses support for groups that are involved in the violent or criminal behavior mentioned above. Supporting or praising leaders of those same organizations, or condoning their violent activities, is not allowed. We welcome broad discussion and social commentary on these general subjects, but ask that people show sensitivity towards victims of violence and discrimination." (Source: https://www.facebook.com/communitystandards)

So right off the back you do a quick search about Sukha and Jinda. Ohhhh, they killed someone and that is “criminal activity.” Did you bother to do a thorough search?

I find it ironic how this picture gets taken off, but then there is nothing about closing the "Global Rally for Humanity" page and the Anti-Muslim rallies happening today. There's also nothing Facebook​ wants to do about the man who had a hand in murdering thousands in Gujarat and turns a blind eye to the daily injustices happening in India (killing of someone accused of eating beef, Dalits stripped by police in public). Oh wait, I forgot Modi just went to Facebook and maybe this is because they're friends now?

With Columbus Day coming up: for so long there has been an observed holiday for Columbus Day, but in recent years there is pushback from institutions as they realize the exploitation, injustices, and lies of Christopher Columbus. To me, that was criminal activity. Activity that the US is still to this day trying to “make right” by providing Native Americans with land and money to “compensate” them for the injustices their ancestors endured. Will you remove all content about Columbus?

Now, let’s focus on the latter of the Community Standards quote - did Facebook do their research into the injustices that occurred against Sikhs in India? Do you know about the thousands and thousands of innocent Sikhs who were murdered for no reason? Are you aware of the media blackouts and methods to silence our people? What would you do if your people were dying because of their faith and the government was the one in charge? Would you sit back or would you do something about it? You mention sensitivity towards victims of violence, so are you going to be sensitive to my people? Do you think by removing this picture and not that of Modi or Columbus or the “Global Rally for Humanity” events is just?

You take someone who has reported a picture and whatever reason they gave you and remove the picture. Or you could just be taking your new friends side, I really hope it’s the former. Dear Facebook, please learn and educate yourself before you continue with your biased and ignorant actions that continue to affect victims of violence and discrimination.