A British Perspective on Lalkaar-CA 2013 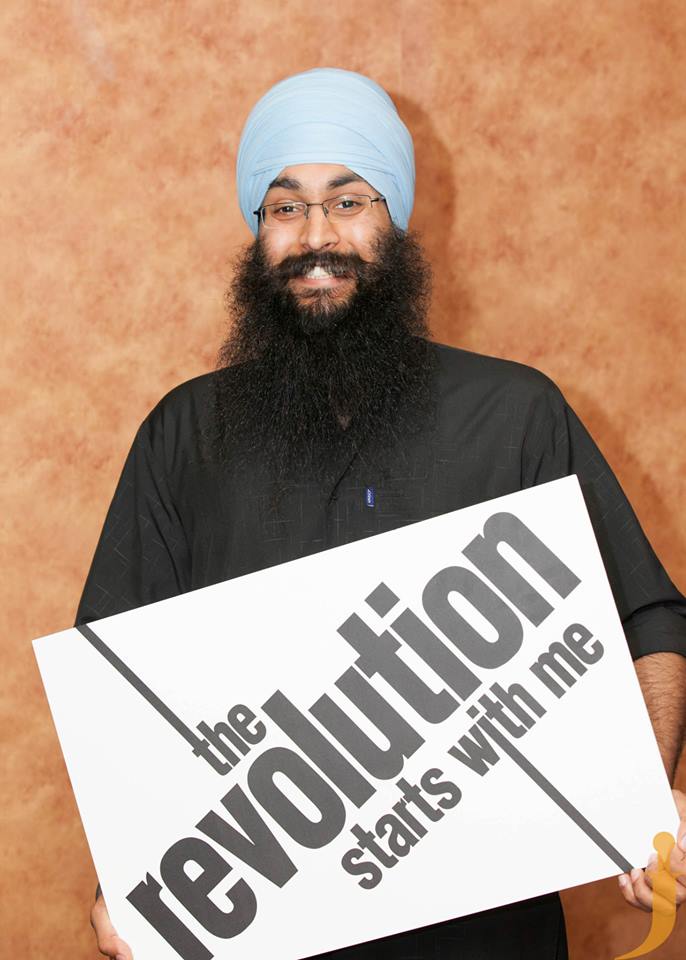 This year I went to the Lalkaar 2013 conference in Davis California. Lalkaar run by the Jakara Movement, a Sikh youth organisation, is now in its 14th year. This was by far the most interesting and inspiring Sikh educational event I have ever been to. Like many young Sikhs that grew up in the UK I failed to engage with the local Gurdwara, when it came to learning about Sikhi in an inclusive and non-judgemental environment. This gap in learning was filled by Sikh youth camps that sought to connect Sikh youngsters with the philosophy of the Sikh Way, but these too had their drawbacks.

I came across the Jakara Movement on social media and my first impressions were of a progressive, interesting and established organisation. I remember when I first saw Lalkaar advertised I really wanted to go but it wasn’t possible. When I began planning my travel to the States this summer my plan was to attend Sidak, a two week intensive Sikh Studies course run by SikhRi in San Antonio, I had no plans of coming to Lalkaar.

I spoke to my friend Narvir, who had attended Lalkaar previously and he had only positive things to say, I began seriously considering attending. My biggest worry was having a place to stay after Lalkaar. After I spoke to some of the sevadars, they connected me with other individuals that said they could house me.  That’s when I packed my bags.

The theme for this year’s Lalkaar was ‘The Revolution Will be Localized’, focusing on our local institutions, especially the Gurdwara and the Misl.  The former is a topic that I have had much involvement with in the past and I was interested to see how it would be addressed. My expectations were of lectures and small group discussions, a format that is familiar from Sikhi camps, what actually happened was far beyond anything I had expected. I arrived a day before the conference so I had a glimpse of the organisational and logistical work that went on behind the scenes. The facilitators, staff and committee members for Lalkaar arrived two days before the conference and began immersing themselves in the content and facilitator trainings.

The conference began on Thursday with hotel check-in and registration. All the participants were given a conference pack that contained the agenda and location information (the conference would involve a variety of locations), a Lalkaar T-shirt and an ID tag. I was pushed out of the Sikhi camp mind-set and realised that this was an actual Sikh youth conference. The camp officially began with a Diwan at the West Sacramento Gurdwara later that evening. Back at the hotel all the participants, of which there were nearly 150, engaged in mass ice breakers, this would be an aspect that was a deliberate part of the fabric of Lalkaar. Meeting new people was not only encouraged; it was mandatory. The reason for this wasn’t just to be social, but to engage with and familiarise yourself with your peers, to be one large Lalkaar family so that all the activities, discussions and performances that followed would involve everyone and foster a positive environment for learning and discussion.

The second day began with Japji Sahib and Kirtan at UC Davis. All the participants then broke up into their smaller groups for the first session, entitled Samajna: Pondering the Problems. This session began with a group discussion about everyone’s individual experience with the Gurdwara and any problems they felt were an issue. What happened next was typical of Lalkaar. The whole group had to create a short skit, filmed on smart phones, centred around the problems/issues identified from the discussion. After lunch we gathered in a lecture theatre for an excellent presentation about research conducted by the Jakara Movement into perceptions of Sikh youth and their engagement with their local Gurdwara. We then got to see each other’s skits. Each of the 10 groups produced a unique, funny and thought-provoking piece that contributed to the understanding of the issues that was developed within the individual group discussions.

The second group session of the day was entitled Sikhna the focus was on Seva and Sangat. We explored readings featuring primary sources that sought to help us understand the definitions and context of Seva and Sangat, two of the key components that form structure of the Gurdwara. The readings featured definitions from the Mahan Kosh, excerpts from the Reht Maryada and ‘The Sikh Revolution’ by Sardar Jagjit Singh, amongst others.

After the Seva and Sangat sessions we explored the theme Shabad of the conference. All the group members were given definitions of key words to help create their own translations, which we then shared within the group. It was moving to see my fellow young Sikhs exploring a Shabad and building their personal connection to the philosophy of the Guru, an aspect of Sikhi that we need to more often bring out of the realm of ‘worship’ and into our personal lives, attitudes and interactions.

The day was wrapped up with a conclusion from the facilitators and feedback from the participants in the lecture theatre that had by now become the hub for our interactions en-masse. Our evening was a delight of Rehraas in a beautiful natural setting and a Picnic. Our entertainment that evening was a talent show where we witnessed some excellent, funny and energetic performances.

Saturday was the final day for the planned content, which began with a presentation (REvolution in the Locale). This presentation defined the institutions of the Panth (Gurdwara, Misl) and explored the ownership of the Gurdwara (Guru Granth, Guru Panth). It explored how the Sangat can reclaim their Gurdwara with new models of Seva that make the Gurdwara relevant to again to the local community with initiatives such as drug centres and supports groups.

For our first group session called Samjauna where we looked at a real life case study. In total there were 3 case studies that were distributed among the groups. They ranged from illegal immigrants and the role of the Gurdwara, SSAs (university Sikh Societies) and a Punjabi class that split from a Gurdwara. The central task for each case study was to create a solution to the problems identified. Each group then presented their solutions to the collective, it was interesting to see the difference in solutions some seemed rather ill suited to the solving the problem, whilst others were innovative, simple and brilliant this showed the collective problem solving power of the Panth.

After lunch we had an open forum where we discussed the issues that were raised throughout the conference and people posed questions that had been raised in group discussions and general questions that people were pondering. In this the committee and facilitators did an exceptional job by guiding the discussion instead of dictating, the floor was totally open for anybody to ask any question and to answer any question. I felt content and at peace at this gathering of equals, even though I may not have agreed with some opinions I didn’t feel any less love towards my fellow participants.

The Revolution Will be Localized.

The final part of the day was perhaps the most different and interesting. As it would be expected the conference placed everyone on a high. In my past experiences there’s been a huge disconnect between the Sikhi high and the “what’s next” situation.  Jakara has built up a structure that allows for inspired individuals to bring the revolution to their local area. By reviving the institution of the Misl, the Jakara Movement has provided an outlet for seva and a vehicle for local change. All the participants were split into groups based on the region of them were from, they then connected with their local Misl and were introduced to the work that was happening in their local area. I was privileged to be a part of Misl Fresno, the first and perhaps the strongest of the Misls hailing from the Jakara heartland. I witnessed how the local initiatives connected young Sikhs with their institutions and how the Sikh community connected with the wider community. Activities like Gurdwara open days, taking pizza to the neighbours around the Gurdwara, most of whom are low income, connects the Sangat with the wider community. The drive to meet everyone doesn’t end with Lalkaar that same passion is translated to action within the local Sikh communities all over Californian. Jakara is constantly expanding with Misls springing up all over the United States and abroad.

As I left Lalkaar I felt a genuine sense of empowerment, I was empowered with knowledge of continued local activism, and I was inspired that so many Sikh youngsters were connecting with the root Sikh values of Seva, Sangat and Shabad in their truest form. I could see for the first time in my life positive consensus building based on Sikh values. I could see the future of the Panth at work. By acting locally with an understanding of the global Sikh perspective you feel empowered to create change, the idea is simple, change ourselves together, change our community together and change our world together. Our Panth always has and always will be made up of a full spectrum of Sikhs, some closer to the Guru some not so, some with resources and some without, what unites us is our connection to the Sikh Way. As my mentor says: “We are not all equal, but we all have the equality of opportunity”. What Jakara has done is create an environment to nurture that opportunity and bind us too it with bonds of love and lasting personal relationships.

The topic of Lalkaar 2014 will be the most important topic of the Sikh year: 1984. 2014 will mark the 30th anniversary of the invasion of Darbar Sahib. All over the world Sikhs will be in dialogue about 1984 its relevance, history and possibilities for the future. If Lalkaar 2013 was anything to go by then Lalkaar 2014 promises to be an even more inspiring, interactive and educational event. If you haven’t been to a Lalkaar conference I highly recommend you attend. The way the conference is designed and the thought that goes into every aspect of it is exceptional. The dedication of the staff, facilitators and committee is inspiring, it is the glue that holds it all together, they are so positive, hardworking and chilled out. The way Californians do things is “hella awesome” this really was an experience I'm never going to forget.

Real solutions will come from the youth as they are the agents of change and have the most potential to deliver a revolution of thought and action.